The City of Fargo and Tharaldson Ethanol work together in a unique water reclamation partnership that benefits not only the City and the industry, but the environment as well. Under authorization of the North Dakota Discharge Elimination System permit, the City of Fargo Wastewater Treatment Facility (WWTF) discharges treated wastewater to the Red River of the North.

Before it reaches the river, a portion of this discharge is diverted to an advanced water treatment facility for further treatment to produce high quality water for use at the Tharaldson Ethanol Plant. From October 2008 through December 2016, Fargo has produced and supplied Tharaldson Ethanol with just over 2.57 billion gallons. Without this reclaimed resource, valuable ground water, surface water and/or drinking water reserves may have been consumed and depleted.

In the summer of 2006, a new 100 million gallon (MG) ethanol plant was being planned in eastern North Dakota, approximately 25 miles west of the City of Fargo. The site of the ethanol plant was selected based on rail access, truck access, corn availability, and power availability, but water supply was not given as much consideration. The selected site was within the Cass Rural Water Users District (CRWUD) service area boundary.

To combat the challenges associated with obtaining a new water appropriation in a quantity-limited, drought susceptible region, the ethanol plant approached the City of Fargo in the fall of 2006. The City of Fargo is the largest city in North Dakota and holds significant surface water appropriations for its drinking water supply system. Supply from the City’s drinking water system, however, presented its own challenges.

To ensure that the City could realistically supply water to an industry outside its City limits, Fargo applied for a point of diversion permit to divert its wastewater effluent away from its receiving stream, the Red River, which serves as the primary water supply source for several downstream communities and industries.

To satisfy the North Dakota State Water Commission (NDSWC), an evaluation of river flows compared to water supply requirements was prepared. The evaluation concluded that even during times of high demand and low river flows, such as drought conditions in the late 1980's, the volume of water in the Red River exceeded all water supply requirements. Through this analysis, the NDSWC conditionally approved the City’s point of diversion permit.

A memorandum of understanding (MOU) between the City of Fargo, CRWUD, and the Ethanol Plant was drafted to define the project requirements and responsibilities. Through the MOU, it was decided that the City of Fargo would sell reclaimed wastewater to CRWUD, which would sell the reclaimed water to the Ethanol Plant. It was also defined that CRWUD would be responsible for construction of an Effluent Reuse Facility (ERF) capable of producing 1.4 million mgd of reverse osmosis quality water.

The City was responsible for providing the WWTF effluent with a site for construction of the facility, operation and ultimate ownership of the ERF. The Ethanol Plant will use the reclaimed wastewater in its boiler, cooling tower, and ethanol production process. The Ethanol Plant will also send its cooling tower blow-down water back to the Fargo WWTF for treatment and discharge. Fargo and CRWUD share responsibility for construction of parallel 26-mile pipelines from the Fargo WWTF to the Ethanol Plant and back.

The project design and material procurement was completed with review and input by all three stakeholders. The reclamation process utilizes ultra-filtration (UF) membranes followed by reverse osmosis (RO) membranes to meet the water quality and quantity requirements of the Ethanol Plant. The RO concentrate will be blended with the WWTF discharge and the UF backwash and cleaning streams will be directed to the WWTF headworks for treatment. 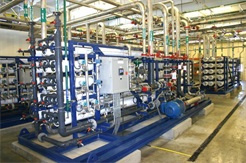 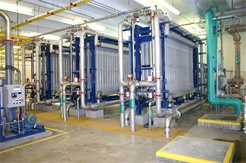