All 13th Avenue Driving Lanes to Open by Wednesday Afternoon

On Wednesday, November 21, weather permitting, contractors for 13th Avenue Road Reconstruction and Infrastructure Improvement Project plan to have all driving lanes from 45th Street South in Fargo to 9th Street East in West Fargo open to traffic by the end of the day. By that time, the more than 700 orange barrels will be removed ahead of the increased holiday traffic this area typically experiences.

Ahead of the full roadway opening to drivers, traffic control devices will be removed over the course of two-days through the work zone:

Traffic will remain in the two outside driving lanes in both directions until the roadway is fully open. Construction crews will continue work in the center of the roadway.

Over the next few weeks, there will be intermittent lane closures during the day on 13th Avenue while crews continue the installation of permanent street lights through West Fargo.

“This project would not have been possible without the collaborative effort between the two cities, local business owners and residents, visitors, project contractors and other city agencies,” said Chris Brungardt, City of West Fargo Public Works Director “After the finishing touches are done, we will soon experience the numerous benefits an urban reconstruction project brings to our greater community.”

The reconstruction of 13th Avenue fixed necessary infrastructure and safety improvements highlighted in the 2008 and current 2018 corridor studies. replacing aging infrastructure to improve both pedestrian and motorists safety.

In the mile-long work zone, crews built a new 6-lane roadway in Fargo and 3-lane westbound and 2-lane eastbound roadway in West Fargo, as well as above and below ground infrastructure improvements in both cities. Project work began in April and included concrete paving, curb and gutter, shared-use path, city utility upgrades, street lights and traffic signal improvements.

The project brought 40,000 square yards of new concrete to the reconstructed lanes of 13th Avenue that will accommodate increasing traffic volumes for future city growth.

“Thank you, motorists and area businesses, for your patience as we know construction zones can be challenging for you,” said Jeremy Gorden, City of Fargo Transportation Division Engineer. “This stretch of 13th Avenue is a multi-use area with pedestrian and heavy vehicle traffic of more than 25,000 vehicles per day. Our cities are now better equipped to handle future traffic to hundreds of businesses and organizations found through this stretch.”

During the reconstruction work, if half of those vehicles took the recommended alternate routes, about three million vehicles continued to travel right through the work zone.

Speeds will remain reduced to 25 mph for the next few days as final project work is completed through the stretch. Speeds will increase to normal speeds of 35 mph after the construction activity is complete.

Next year, crews will have minor project work in the center of the roadway to complete that will require temporary lane closures and intersection restrictions for a couple weeks in the spring.

Traffic control: Motorists are carried on the outside through lanes and remain on the respective side of travel.

Lane widths are reduced to a maximum of 11 feet throughout the project during this phase. Trucks and other large vehicles are encouraged to use alternate routes.

To access commerce or travel through the area, drivers are encouraged to use alternative routes for their east-west driving.

PROJECT PHASES – As the project progresses, there will be multiple shifts in traffic control. The anticipated phase schedule is:

**Please remember all schedules are tentative and weather dependent. 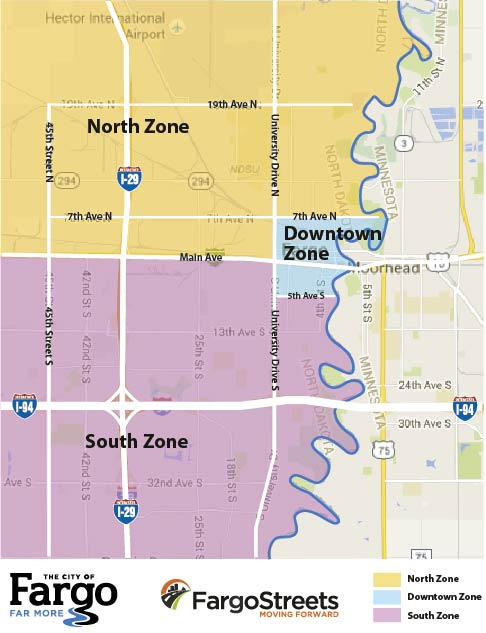