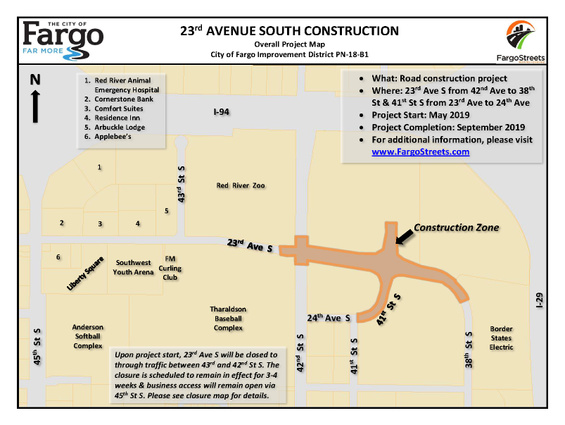 The 23rd Ave S roadway construction project is substantially complete and fully open to traffic. Due to a material delivery delay, the traffic signal system for the intersection of 23rd Ave and 42nd St S will not be installed until the spring of 2020.

The planned work for this project includes the new construction of paved roadways, sidewalks, and incidentals on 23rd Avenue South from 42nd Street to 38th Street and on 41st Street South from 23rd Avenue to 24th Avenue. In addition, new traffic signals and concrete pavement will be installed at the 23rd Avenue & 42nd Street intersection.

The project is scheduled to begin in late May, with substantial project completion scheduled for September 6, 2019.

This project will be funded through a combination of Special Assessment and General Infrastructure funds.

The purpose of this project is to install the infrastructure required for any future development planned for the southwest quadrant of the I-29 & I-94 interchange. The project also allows for the connection to existing infrastructure, as well as intersection improvements at 23rd Avenue South and 42nd Street.