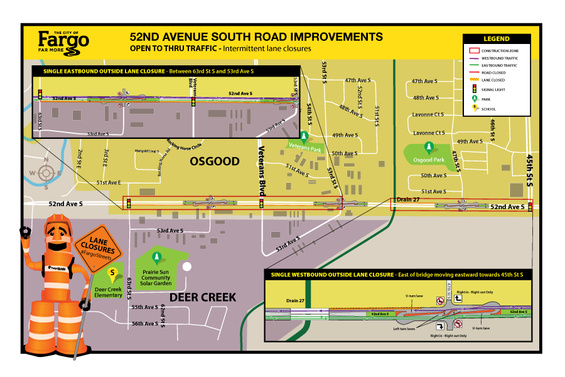 This project reached substantial completion in the summer of 2020.

The project benefits include:

Animation on how to use an RCUT intersection

The City of Fargo and the North Dakota Department of Transportation NDDOT) will reconstruct 52nd Avenue South between 45th Street to just west of 63rd Street in 2019. This project will include the following: 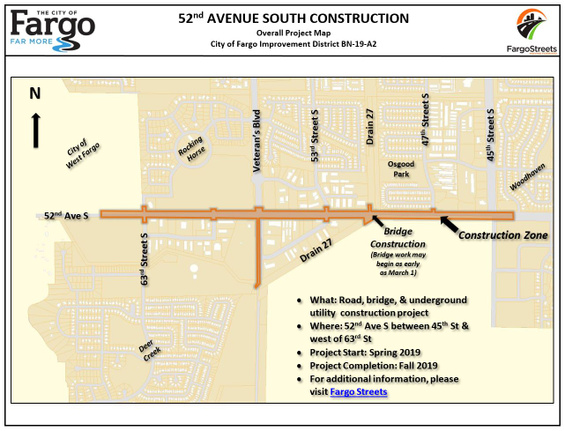 52nd Avenue South is functionally classified as a major arterial roadway. The purpose of the project is to reconstruct and improve 52nd Avenue South from 45th Street to 63rd Street to serve as an important link in the multimodal transportation system, thereby accommodating the long-term growth and development within the project area by addressing capacity needs, level of service (LOS), pavement condition and pedestrian infrastructure.

This project will reconstruct the existing rural 2 lane roadway into an urban arterial capable of carrying the following current and projected traffic volumes:

The improvement project will be spread over six-phases, which will overlap or begin after phase work is complete:

The bridge over Drain 27 (between 45th Street and Veteran's Boulevard) closed on March 1 and will tentatively reopen in mid to late August. 52nd Avenue through traffic is detoured to other routes during this bridge closure.

Throughout the project, sidewalk and drainage design was re-evaluated to ensure sidewalk placement doesn’t impact existing drainage and future development. Work to complete the new multi-use paths, landscaping, and profile corrections were moved to a 2020 completion date along with modifications to the signal system at 45th Street South.

The cost of construction is estimated to be $19.2 million. Funding for the project will consist of a combination of the following sources:

The apparent low bidder is Kindred Plumbing and Heating with a construction cost of approx. $19.2 million.

Stay current on detour routes, construction progress, and all other project updates by visiting FargoStreets.com, where you can sign up for project email notifications. You can also follow FargoStreets on Twitter (@FargoStreets) and Facebook for up-to-date road related information.

Starting this week, contractors for City of Fargo’s 52nd Avenue South roadway and infrastructure improvement project will resume work to complete carry over items from last year including multi-use paths and landscaping, as well as warranty work such as curb and road panel replacements … Read Update