Zone: NorthWhat zone am I? 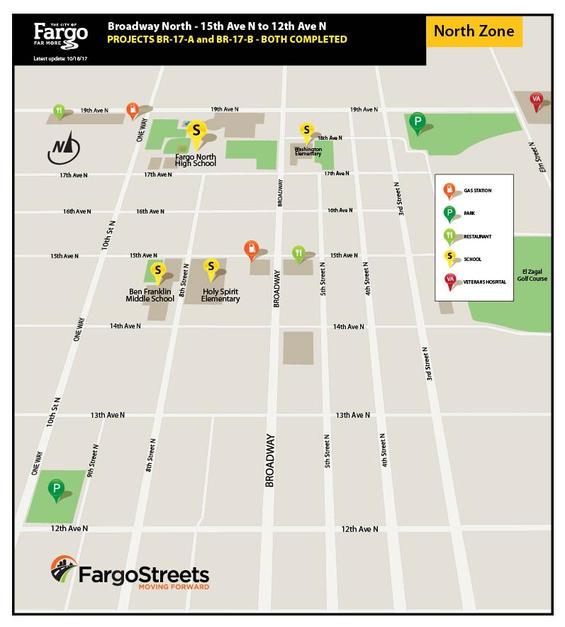 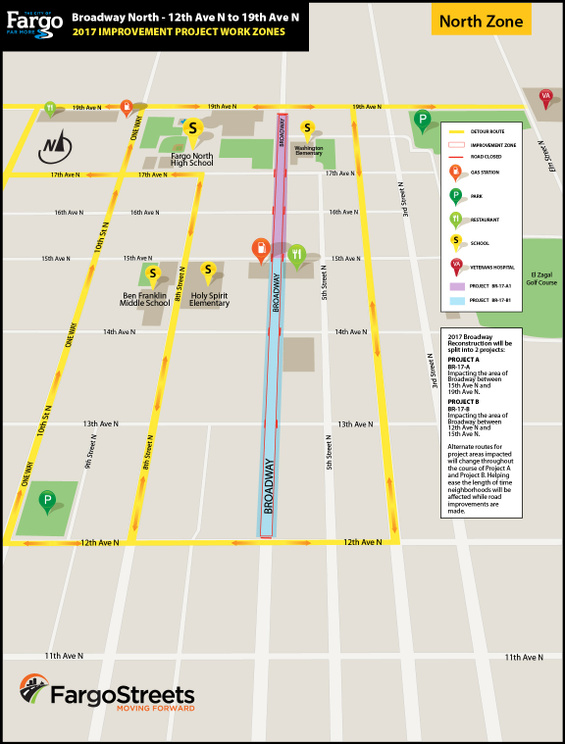 Both projects include complete roadway reconstruction, new curb and gutter, street lights, concrete pavement, some city utilities, and installation of a 30” sanitary sewer force main. The force main will be installed from the downtown area to the Waste Water Treatment Plant. Once completed, it will provide additional capacity to the Broadway interceptor line, which currently is often at maximum capacity.

The City of Fargo has spent the last two construction seasons completing similar projects along Broadway. Broadway’s current pavement on this final stretch is 60 years old and has come to the end of its useful life. Because the underground utility work requires street excavation, FargoStreets will completely reconstruct this portion of Broadway. City utilities were also outdated and needed to be updated to provide reliable, efficient service to businesses and residents in this part of north Fargo. This final portion of reconstruction along Broadway and its surrounding streets will tie into areas that were improved during previous construction seasons.

Broadway will close to thru traffic from 12th Ave. N up to 19th Ave. N, not including the 19th Ave. N intersection that was updated last season or the intersection at Broadway and 12th Ave N. Drivers should plan to use 4th Street N or alternate routes throughout project work.

The first project including the area between 15th Ave. N and 19th Ave. N was awarded in March and construction efforts began on Monday, April 17th. At this time, Broadway closed between 15th Ave. N and 16th Ave. N. The intersection at 15th Ave. also closed, but the 16th Ave N. intersection remains open until the next project update. As part of the contract, crews cannot start work in front of Washington Elementary or Fargo North until school is out in June. Work in this area (17th Ave – 18th Ave) also must be completed by the time school is back in session this August.

The second project from 12th Ave. N to 15th Ave. N will begin in May, weather permitting. Construction work for both projects will overlap, closing the entire stretch between 12th Ave. N and 19th Ave. N at times. All work should be completed by fall.

Special assessments are payable over 25 years with interest applied the year after the project is complete. The project is being funded by a combination of:

In addition to the informational meeting scheduled before the projects begin, all project background and updates will be available on FargoStreets.com, where you can sign up for project email notifications. You can also follow FargoStreets on Twitter (@FargoStreets) and Facebook for up-to-date road related information.