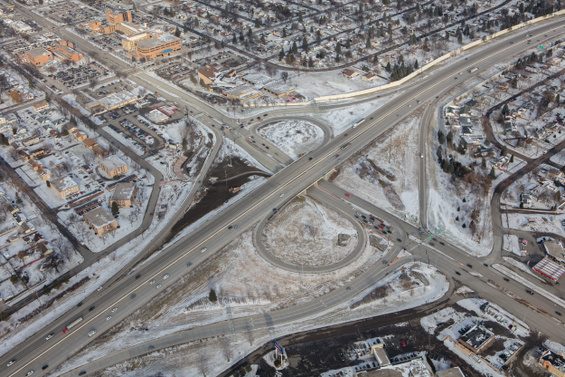 I-94 and University Interchange Improvement Project: Image taken the end of October

The City of Fargo along with the NDDOT oversaw the complete reconstruction of I-94 and University Drive interchange, updates to traffic signals used by interstate traffic and half mile of University Drive roadway. The project reconnected and straightened out the interstate ramps, lengthened the turn lanes and created access control to help with better traffic flow through the area. University Drive is three-driving lanes plus interstate turning lanes in each direction.

The new interchange design creates multimodal separation, so cars and pedestrians have separation. Safety improvements will increase the interest in use of the interchange and reduce conflict points. There was one driveway consolidated in the project work, otherwise all other business/access driveways remain on University Drive.

University Drive and I-94 remained open with reduced driving lanes in both directions of travel on each of the roadways.

Keeping traffic moving through the work zone was the goal of the traffic control design across four phases of project work.

Work on the south side of interstate was completed as resources allowed and the pedestrian underpass was built during multiple phases of the project.

NDDOT is funding the project with a majority of federal and state funds. The City of Fargo has participating items for infrastructure improvements.

As project work nears completion, a series of short-term traffic control changes or shifts in open driving lanes will occur over the next week. … Read Update